I’m a writer working mainly with fiction for children and youth. I have published 30+ books, produced scripts for comics and television, worked with theatre and written a libretto. My main genre is horror and ghost stories. I love the drama and strong emotions connected to scary stories – screams, laughter and tears.

As a children’s book author, I visit schools and talk to primary school students about ghost stories and fears. It’s an excellent introduction to story telling – but it’s also a short cut to the important subject of fear. I believe it’s extremely important to talk about and understand how our emotions work when it comes to fear. It’s dead fun – but it makes us kind of stupid. If we can learn more about that – one day it might not be as easy for companies, politicians and media to manipulate us through our fears.

Since scary and thrilling stories quite often attract kids that maybe do not read very much in general I see how ghost stories can open doors to consuming and using language. To read a scary story is exciting – and many kids also get inspired to tell and write ghost stories.

In 2015 my book Inmurade/Contained was nominated to Swedish Radio literary award for children and youth and in 2017 I was nominated for an August reward together with the illustrator Per Gustavsson for our book Den förskräckliga historien om Lilla Hon/The terrible story of Little She. The same book is now nominated for The Nordic Council Children and Young People’s Literature Prize 2019. 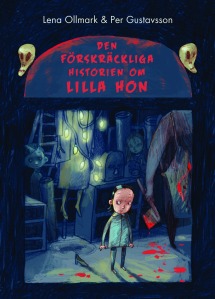 ”The river of published books has its glittering, shiny pearls. This one is absolutely fantastic … In one way it is very macabre, but it is also very warm and loving.” Viktoria Hansén, Malou efter tio TV4

The terrible story of Little She has been adapted into an opera that opened in the autumn of 2018. The book has an independent sequel – The Horrific tale of Little He.

She was not alone in the dark, she felt the presence of something moving. Something twisted and evil …

A ghost story for the primary school age, set in the Stockholm archipelago and inspired by Alfred Hitchcock’s and Daphne du Maurier’s Rebecca. 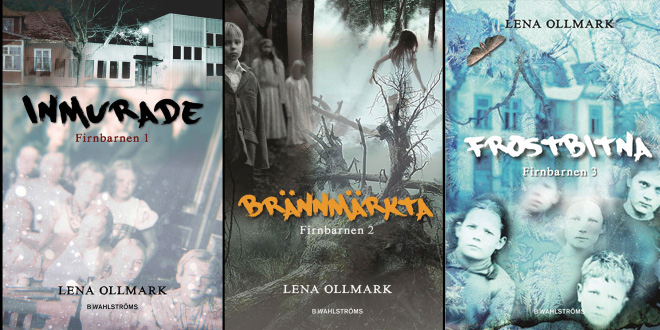 The most frightening ghost stories does not take place in old attics and in abandoned houses, but rather where one should feel most safe and secure.

None of the construction workers wanted to admit it, but what was behind the brick wall in the basement made them all uncomfortable. The school benches and cabinets were covered with a thick layer of dust. On a couple of the benches, books still lay open. As if a school class got up and left the room and then disappeared. What had happened here?

The Ghost Ship Vallona and other stories from Krabbsjögrund, book series (six titels) 2008 – 2014

Karl will spend a few weeks with his grandfather in his summer holiday town Krabbsjögrund. The town is closed for the season, everything seems dark and hostile. Even Grandpa is different, he seems worried, almost scared. What is the story behind the mysterious model of the ship Vallona hanging in the church?

I was born in 1968 and grew up among raspberries and moose on the countryside outside Stockholm, Sweden. In my early years I devoured stories – everything from horse books and C G Lewis to comic books about Justice League of America and Hergé’s Tintin. From an early age I was fascinated by horror and ghost stories.

My professional life began as a comic book editor at the publishing houses Epix and Atlantic in the early 1990s. I started to produce scripts for my own comics during my university studies and since 1995 I have made a living out of my writing. I have worked with many different types of texts and genres – from humor books and animated television series such as Nasse/Bjorn Bear and Lilla Spöket Laban/The Little Ghost Laban to journalism, mainly about psychology with a focus on depression, anxiety and trauma. I have also worked with the text material for the Stockholm Technical Museum’s exhibition 100 innovations and written scripts for sci-fi stories for Swedish Radio’s UFO pod.

But mainly I produce ghost and horror stories for young people. I always aim for my scary stories to be a good story as well as rollercoaster ride that makes you scream, laugh and cry. I love to torment my main characters.

When I do not write I travel – in Sweden and abroad. I like football, ice hockey and good food. On my wish list: more time to read more books, see a larger number of films, tv-series and watch all the world’s news feeds. Otherwise, I eagerly eavesdrop on wine tastings, cheat as a scriptwriter in performance art projects and have once exhibited motif-painted string panties in London and Stockholm.